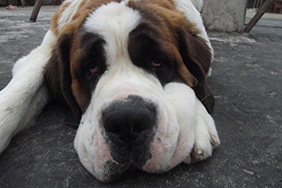 Many large or giant breed dog owners have surely heard the term “GDV” thrown around and closely associated with “Bloat”  and may wonder exactly what that means.  GDV stands for Gastric Dilation Volvulus and occurs when the stomach rotates on itself after filling with gas or large amounts of food.  As you may imagine from my description, this is a painful condition and not one that easily self resolves.   As a rule, this condition rapidly worsens resulting in damage to the stomach, damage to the spleen, shock and ultimately, death.  This is an emergency situation and one that requires surgical correction of the twisted stomach and pretty substantial supportive care (on the order of 5-7 days of hospitalization) if your pooch has progressed along the negative timeline of side effects to the condition.

They can progress along this negative timeline pretty rapidly.  As a military veterinarian, I was responsible for a large group of dogs who were at serious risk.  Prior to across the board gastropexy procedures (see below for information about the surgery), I heard many reports of dogs who were left alone for the night in the kennels, around 1900 (that’s 7:00pm for the civilians in the crowd) and found at 0600 the next morning, dead.  A necropsy (doggie autopsy) would later confirm GDV as the cause.

I don’t mean to overdramatize the situation, but it can be a dire one for your big pal and doesn’t guarantee a positive outcome, despite our best efforts.

But there’s good news and its called… Gastropexy!  This is a procedure where your friendly veterinarian attaches the side of the stomach to the inside of the body wall.  Dogs can still bloat but the stomach is unable to twist around once it’s firmly adhered to the wall.  My recommendation is to have all predisposed breeds (see below for at risk dogs) pexied at the time of spay or neuter.  Thanks to the Army Veterinarians (insert salute here), we have a great, relatively non-invasive procedure that gets the job done with very few, if any, potential complications!

Now you’re asking yourself… do I do this? What if my dogs already spayed or neutered? What if he’s 3 years old?  It’s never too late to be proactive, there aren’t any age predispositions in GDV.  Let me outline the at risk population and you can decide if your dog is one who warrants the procedure (and, as always, ask your friendly veterinarian for advice and help making the decision).

As already stated, large breed dogs are the at risk population.  To help narrow that down, those with deep chests have a higher incidence of GDV; German Shepherd Dogs, Great Danes, Standard Poodles, and Golden Retrievers are good examples.  Those large breed, deep chested dogs who tend to bolt their food or have eaten a large volume of food suddenly (oops, ripped into a 40# bag and is laid out, totally full) and dogs who have excessive exercise immediately after eating (see, so you shouldn’t swim for ½ hour after a meal) are at increased risk as well.

Like with diseases like Heart worm and those covered in our core vaccination protocols, GDV is an easily prevented condition.  I strongly encourage you to talk to your friendly veterinarian if you have a large or giant breed dog about having this procedure done.

Please inquire at Central Animal Hospital, as this procedure will be included in our large breed spay/neuter package at a reduced rate. Remember…it is never too soon to be proactive!

*We are closed from noon – 2:00PM on Wednesdays for staff training.*